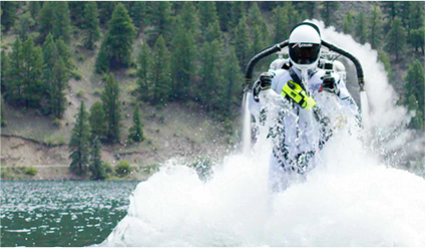 JetPack International’s default sponsor, Apollo Energy Gum, was the focus of an ambitious jetpack stunt in August. Straight from the Flight Lab, the idea of launching the jetpack from underwater had been tossed about, and the more thinking that went into it, the more confident we became in being able to pull it off.

The location, Lake San Cristobal in the southern Colorado mountains, was chosen for its breathtaking backdrop. Planning began in earnest: SCUBA tanks, rescue and film boats, and a whole crew of videographers, drone pilots, and media representatives invaded Lake City early in the morning. Although we knew the jetpack, by virtue of its unique fuel and engine, would function underwater, the logistics to balance, breathe, and launch from below the surface pushed Apollo Pilot Eric Scott’s focus, determination, and skill to the maximum.

Eric backed into the water from the shoreline with the assistance of Troy on SCUBA detail. Multiple RED cameras fired up, and the buzz of drone rotors echoed across the lake’s surface. Like he had performed it 1000 times, Eric roared into action, launched skyward, and pushed the machine to its limits as he accelerated toward the shore. Eric summed up the experience by saying, “That was one of the most amazing things I have ever done!”

Three more flights from the frigid mountain lake and we had gigabytes of outstanding footage, a shivering pilot, and dozens of smiles as select clips made their way onto editing screens.

Jet P.I. is all about pushing the limits and showcasing the impossible. On this day, we accomplished both, and helped launch Apollo Energy Gum into the market.