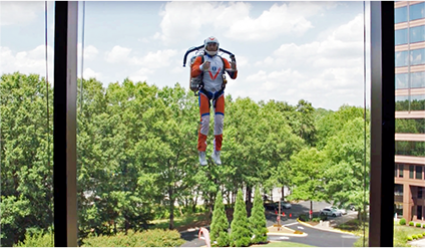 What gets more attention that a jetpack? Two jetpacks! When VOIP service provider wanted to announce their new high-tech business offering, the idea for “Office Takeover” was born. As office workers arrived on-site for their daily grind, they were amazed by many high-tech displays, including levitating billboards, 3D holograms, drones, and custom-branded jetpacks towing Vonage banners through the sky.

The event required a total production crew of 70 people for the filming of a stunning commercial. JetPack International’s two machines and two pilots, Nick and Eric, performed 10 flawless flights in front of the buildings to the amazement of hundreds of lucky office workers, with both pilots in the air at the same time on more than one occasion.

Two jetpacks in the air at the same time is truly a unique stunt that only Jet P.I. has the ability to offer. In the history of the human race, this has been performed only a handful of times, and was a special highlight of this project. On one of the flights, Nick and Eric launched in sync from opposite sides of the site, banners in tow, and perfectly timed a crisscross pattern on either side of a hovering drone. The video was spectacular!

Out of the 300 or so people outside to experience the stunt live, 300 or so people had their cell phone cameras pointed skyward: a testament to the jetpack’s power to capture 100% attention, every time. Jet P.I. has a decade of experience providing jaw-dropping, unique performances for some of the world’s largest brands and events.