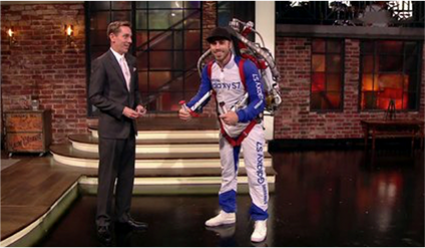 How do you showcase your company’s newest technology offerings and gain millions of dollars of free press? With a jetpack, of course! The Jet P.I. team was invited to perform a series of stunts in Ireland on behalf of Samsung to draw attention to the launch of their newest smartphone, the Galaxy S7. The stunt series highlighted pilot Nick Macomber as he performed for the cameras and live spectators at several iconic Dublin landmarks. Each flight posed new challenges, and the combined series made for some of Nick’s most impressive work, and a marketing department’s dream.

The week of stunt-based marketing, which included coverage in every major Irish newspaper and highlights on broadcast and social media, exploded into worldwide coverage with a grand finale flight on live television for the number one late night show in Ireland, The Late Late Show. Nick wowed the live, television, and social media audiences with a technical indoor flight onto the stage and an interview with the show’s host, all with a custom-branded Samsung JetPack, flight suit, and helmet.

Between thousands of social posts, re-posts, and shares, and the extensive print, news, and live TV coverage, the project was a huge success, and it’s safe to say that nearly everyone in Ireland knew that Jet P.I. and Samsung were causing a stir.
Our jetpacks do much more than showcase human ingenuity and the dream of flight. They get attention. Lots of it.