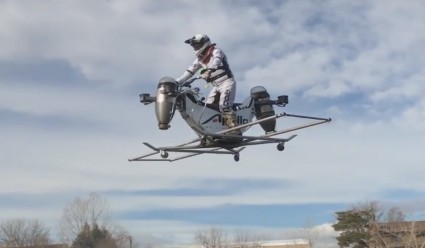 Straight out of a science fiction film comes the Apollo JetBike, the world’s first jet engine-powered flying motorcycle. We have been holding back the JetBike’s release as we have been conducting flight and control testing. Endless hours of design, manufacturing, testing, and re-design have finally brought to the air something that seemed impossible. Now that our prototype has passed initial flight tests, it’s time to get it ready to race. We are working hard to push the limits of speed, maneuverability, aesthetics, and safety. Apollo Formula Air International Race Series… Summer 2017. Now accepting pre-production orders.