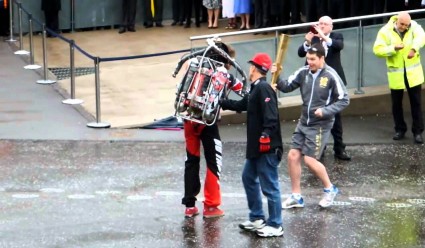 Very few people can claim to have held the Olympic Torch, and only one man in history has ever carried the torch while flying through the air on a jet pack.

In 1984, pilot Bill Suitor flew one of the original jet pack models at the Los Angeles Olympics. 28 years later, JetPack International had the honor of being the first person to fly with the 2012 Olympic Torch around the National Space Center in Leicester.

In a flight that was covered by international news stations, JetPack International team pilot Nick flew the Olympic torch with the Apollo JetPack from Leicester to Peterborough to deliver it to Olympic athlete Kevin Davies. This flight was an incredible honor and one that we will never forget.